We pride in upholding the highest level of customer service 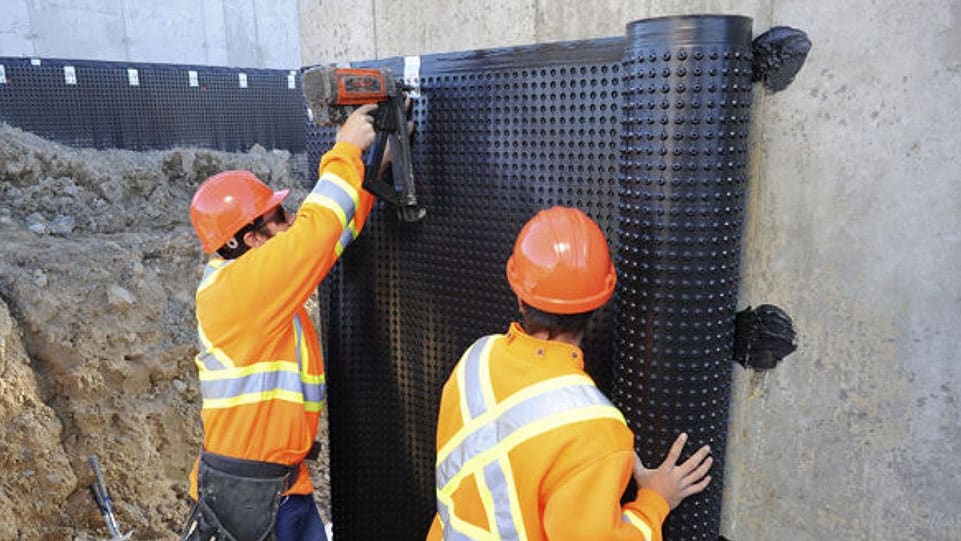 Ground water has been the root cause of water seeping into basements for over a century. Water seepage and leaks in foundation walls allow water to accumulate in your basement, promoting the growth of mold and fungus

Poured foundations are generally smooth and continuous from end to end. They also have a uniform network of tie hole patches. When forms are set to pour foundation walls, the inside and outside forms are fastened together with treaded rod to resist the outward force caused by the concrete when it is being installed.  After the concrete has solidified the ties are removed and the forms are brought down. The removal of the ties causes a network of holes spanning across the entire foundation wall. Installers uses hydraulic cement to patch each hole. If the hole isn’t filled entirely, it will be the weakest link in in the foundation wall, allowing for future failures. In the event of a tie-hole leak, it is recommended that a larger area be waterproofed, as more times than not, repairing a small section will fix the apparent problem and every other tie hole patch will be in question.

Cracks in foundation walls are generally caused by 2 main factors; lateral pressure and concrete shrinking. In some cases these two factors can compound a crack, however it is important to understand that these two factors occur under different circumstances.

The amount of shrinking in a foundation wall is dependent on a number of factors, including curing environment, the size of aggregates in the concrete, and the Portland cement content. All of these factors affect the concrete in the same manner as they directly affect the moisture content during the installation and curing process. As the concrete sheds moisture, the concrete begins to shrink. Under some circumstances when a very moist concrete becomes excesively dry during the curing process, vertical and diagonal cracks can form. These cracks can be severe enough to be potential water leaks, in many cases however, the cracks do not span through the entire wall.

Window well drains, much like weeping tile can be plugged from silt, sediment and debris. In this situation the options for repair can be limited. Depending on the extent of the plug different methods can be used to bring the drain back into working order. If the majority of the material causing the plug is found in the vertical section, high pressure water jetting the line is an affordable and effective way to bring the line back to working condition. More often than not, the vertical section rinses the material into the weeping tile, and the material accumulates in long horizontal sections of the weeping tile. This situation requires excavation, as a new drainage system is required with preventative measures in place to avoid future blockages. 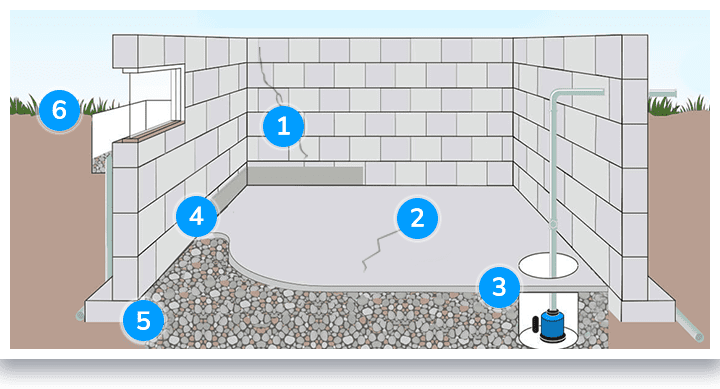 If You Have Any Emergency Waterproofing Need, Simply Call Our 24 Hour Emergency Service Team

"Adam and his team were great to work with. We are very pleased to have chosen them to work with for waterproofing our home. Adam came to give us an estimate and explain what would be done both in person and by email going over the details cleary. On the day of the job the team came prepared, they were prompt, professional and kind. When it was finished the place was tidy and clean. Very hard working team. Definitely will recommend Adam and his team to anyone needing waterproofing."

"I have to admit I went with Adam primarily because he was cheaper than the other quote I got but I was super pleased with my decision. He showed up when he said he would and did a very professional job. It turned out he had to do some extra work we hadn't planned for but he handled that with care and didn't charge me any extra. He and his colleague were very respectful of my property and were friendly and enjoyable to talk to. Best of all, they left the place looking very clean and orderly and took away all the garbage with them. I've already told several friends that I would highly recommend Adam."

"Adam and his crew were very professional and considerate while installing watering proofing with a sump pump system in my basement. At all times they were courteous and respectful of my property. They take the quality of their workmanship seriously. The job was completed on time for the quoted amount. I was very pleased with the whole experience. I would recommend them to anyone."

We provide internal and external waterproofing solutions, to satisfy the needs of our clients. All of our procedures are outlined by product manufacturers, as each product requirement is met in order to qualify for full manufacturer's warranty. We take pride in upholding the highest level of customer service, making sure each one of our clients has an enlightening experience from beginning to end.